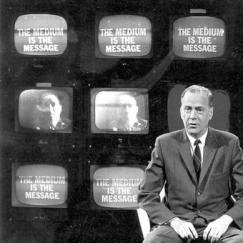 McLuhan wrote enigmatic books exploring the changing relationship between people and their media environments.  Expressions like "the medium is the message" and the term "global village" emphasized the systemic nature of media influence on people and ideas. In the early 1950s, McLuhan's was asked to write a textbook for high school students about media and society. Instead, he wrote Understanding Media: The Extensions of Man (1964) which examines media as a technological extension of the body.

HOW THEY INFLUENCED YOU?

Marshall McLuhan - Digital Prophecies: The Medium is the Message

Remember that values questions have a “you” in them. The goal is to involve people in relating what they see on the screen to their own lives, not to analyze the filmmaker’s technique or to engage in intellectual criticism. Allow the conversation to flow along a values and feelings track.